skip to main | skip to sidebar

Today, there was a pilgrimage from Linnaeus to one of Sweden's most globally significant creations... 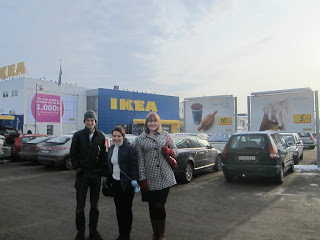 Photo credit: Jackie Smith
Pictured: Alex "He Doesn't Even Go Here!" Hipwell, Australian Emelia, and American Emelia
(Yes, there is ANOTHER Emelia. We are the Emelias.)
Yep.  IKEA.  The first one ever from 1953.  It's in Älmhult, a town about an hour from Vaxjo.  On the bus ride there, sights included a bunch of trees, a lot of snow, and houses at random.

After patronizing Sweden's finest mass-marketed products, we ventured around town a bit.


Okay, so we actually saw this from the bus, but it's in the town, so get over it.
I hope everyone likes my coat, because it's shaping up to be the only thing I'll be photographed in until at least March.
Then we accidentally boarded the bus an entire hour early and compared driver's licenses and our various ID cards.   On the return trip to Vaxjo, I fell asleep.  This was a big deal, because I usually can't sleep in moving vehicles.  Seriously, I can count the number of times it's happened on one hand.  (But I won't, because no one cares about that.)


Tomorrow is a day of cultural happenings in town.  Stay tuned.
Posted by Emelia at 12:18 AM No comments:

I Skyped my family last night.  Note the look of extreme wonder on Jeffie's face. 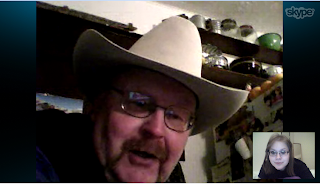 (Not pictured: my mother and several cats.)
Posted by Emelia at 1:19 PM No comments:

It snowed enough to coat the ground in a good three inches today, and it was fantastic.  A group of us went wandering outside after dark (which is anytime after 4:30), and lots of pictures happened.  Mine aren't on Facebook yet, but as a preview... 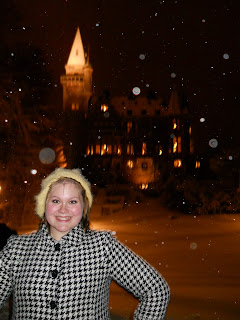 ...my bangs were trying to escape. But my hair's not the focus. The focus is the background--Teleborg Castle! It's located incredibly close to the university campus. (For a little more information, check out its Wikipedia page.) We're having some sort of student dinner there soon, and I am also shamelessly excited about that.
Posted by Emelia at 12:36 AM No comments:

Blogspot decided to show up on my computer in Swedish, and honestly, it wasn't as surprising as it should have been. It's all part of my slow acclimation to a culture where--surprise!--everything isn't in English.

All right.  Let me start at the beginning...or better yet, the middle.  While waiting six hours for my plane to Copenhagen, I finished a book and ate an entire bag of chocolate-covered pretzels.  Then the flight happened.  I had an entire row to myself, which meant I could stretch across it.  Thank you, God!  (For those of you that haven't seen me, I'm 5'11 in flats.  Finding jeans is one of the banes of my existence.)  Even though it was so late (ten o'clock at night), the flight attendants served dinner and drinks.  I passed on the food, but did have some white wine while I watched part The Holiday.  I'm not sure if I should have felt sophisticated or sadly single.

Sleeping on a plane is an experience not unlike sleeping on a charter bus.  It's not really possible to do comfortably.  There was a period of time where I was out, but it could have been anywhere from forty-five minutes to four hours. The best part of the flight was the screen that showed where our plane was in relation to the earth.  We crossed over Canada to Iceland, then across Scotland to Denmark.  I refrained from taking pictures of Copenhagen during the landing, because I didn't want to be that tourist-y.  (Don't worry, though--I've more than made up for it within the past day.)

I had a minor freak-out at the airport because I thought my suitcase had gotten lost.  Then I recognized other people from Chicago that were waiting around for their bags, and I relaxed a teensy bit.  Still, one of the most elated feelings I've ever experienced was seeing Elton glide down the conveyor belt.

Now is the time I should detail not knowing how to buy a train ticket, getting lost in the station, and accidentally ending up in Norway because I got on the wrong train.  However, none of that happened. (I know.  I was shocked too.)  The nice thing is that the airport and train station in Copenhagen are connected and most everyone speaks English.  After conferring with a very pleasant British man en route to Malmo, Sweden, I took his advice and got on that train. Once I got there, I hunted for the platform to Vaxjo for a good twenty minutes.  I talked to a few people because I couldn't find where I was supposed to board, and it turns out that I was on the wrong side of the tracks...literally.  I finally found it with a good ten minutes to spare before my train.  Then it was smooth sailing all the way to Vaxjo.  Frankly, I'm still in shock that I made it!

My first class starts Monday at 5:30 (P.M., not A.M.....just to clarify).  There was an introductory meeting for it yesterday at 5:00, but unfortunately, I wasn't even to the city yet.  I should be able to catch up.  Anyway, Monday's a long time away!
Posted by Emelia at 5:55 PM No comments:

Curious about Sweden? Well, just hold your horses. I haven't formed it into words yet.

But, for your enjoyment, yesterday's airport notes!

I'm supposed to board my flight to Chicago O'Hare at gate E10.  There's a crowd of people up there.  Are they checking in?  Didn't we already do that?

Spent the last day with my cousins in Sleepy Eye, Minnesota.  These are the cousins that share the same strong Scandinavian blood that I have coursing through my tense veins.   They're fantastic people.  (I'm saying that both because they are and because they for sure are reading this.  Hi, guys!)

It's a very clear, very cold day.  Last night's snow is completely gone.  The runway is clear, and as soon as my darn plane gets here, I will be ready to go.

Phone is dead.  Dead-ish, anyway.  I texted farewells to people.  Figures it would make this dramatic.

I've probably walked five miles around this airport.    I've been running on adrenaline today and now that I'm not doing anything but waiting for my flight to Copenhagen, it's catching up with me.

It's unreal to hear announcements like "Last call for Flight Whatever, nonstop to London Heathrow" and "Boarding now for Istanbul."  I am not in America anymore...because airports are neutral.

Since I leave on Tuesday, I decided to pack today.  I blithely thought, This'll maybe take an hour. I'm not slow or stupid. I know what I need.  Let's get this done.


Many Meat Loaf songs later, I realized that packing for 5 months in Europe is much more intensive than packing for 10 days in Mexico or a week at band camp.  When I thought I had completed my quest, I attempted to lift my suitcase and nearly gave myself a hernia (can that even happen?).  I decided it was a bit too heavy, removed two scarves, and dragged it downstairs to the scale.

The beast weighed close to 70 pounds.

Cue the excessive anger.  I was annoyed that my hours of work had led to this calamity, and offended that Scandinavian Airlines had a baggage weight limit of 50 pounds.  Did they not respect my need for a complete wardrobe?!?

As I reorganized my suitcase, a large fuchsia contraption named Elton, I noticed the heft of one of my new yellow Converse sneakers.  Out of curiosity, I dropped it and its mate on the scale, then added another pair.
They totaled about five pounds. Those two pairs plus heels, snow boots, and regular boots added up to about 20 pounds of shoes.

I had found my packing's Kryptonite.

I ended up moving two pairs of shoes to my carry-on bag and ruthlessly eliminating sweaters and perfume from my suitcase, which as of now weighs in at just under 50 pounds.  I'm sure when I unpack in Sweden, I'll be dumbfounded by its contents.  That, however, is a worry for another day.
Posted by Emelia at 9:37 AM No comments:

Posted by Emelia at 7:16 AM No comments:

Blast From the Past 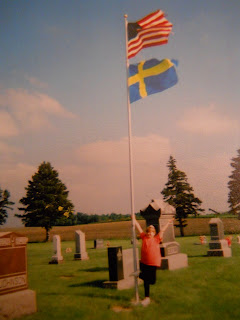 I found this picture tonight, and it made me really happy. I've always been into my Swedish roots!


Also, I bought my plane ticket this morning. Seventeen days 'til I go across the ocean!
Posted by Emelia at 6:21 AM No comments: